Can we knock on death’s door when the storms of life become unbearable? I hope Victorians will always answer no. And that’s why I was saddened to hear that Premier Andrews had successfully passed euthanasia legislation through the lower house. Voting on this legislation is huge. Our culture has long said; stand by your mates; care for your cobbers. I’m hoping sitting members of the upper house don’t imagine euthanasia will supply fresh reserves of compassion. Death is not mercy.

I realise the motivations behind ’dying with dignity’ are well intentioned. We all want to respond well to human suffering. But we need to see through euphemisms like ‘dying with dignity’. Even when you chose the time and place you never remove the hard edge of death’s reality. No one lives and dies in isolation. Our actions for good or ill impact those around us. Beyond Blue have been telling us this for years.

On average eight Australians take their own lives daily. Six of the eight are men. And rural communities, like ours, bear the greater burden of this tragic loss. Passing the Euthanasia bill is I think a big mistake. What do we say to our young men who are struggling with life when their government has said death is a reasonable option? Will Victoria eventually have two hotlines? One for comfort and one for consent? I hope we never get there. Please vote no.

I think we see spiritual but not religious in action when our test cricketers look to the heavens acknowledging their little mate. They imagine he’s there. They are spiritual about it. But it’s disconnected from any formal religion. This new kind of spirituality is how many people are processing life and death. The church is thought boring and cold, even narrow. You might think a minister would find this deflating. But it’s not. I find it fascinating because people still believe.

The scientific age has not cancelled belief. People still believe there is something on the other side, something or someone bigger than us. So if you count yourself in the spiritual but not religious group, reflect for a moment. What do you believe about heaven? It’s a fair question. What do you believe about heaven? And why have you come to your belief?

Last year the Oxford Dictionary’s new word of the year was an adjective – post-truth. The idea is simple enough. You go beyond the bare facts, the truth, and make your decisions based upon your emotion and feelings about things. Now that can sound empowering but really it’s hollow.

For example; you can sincerely believe, with all your heart that I’m going to gift you $1000. But unless I have promised it, no amount of sincerity (post truth conviction) actually creates the gift. It’s a hollow belief. On the other hand, if I have promised $1000 as a gift, and I can keep my promise, then your sincere belief (weak or strong) is well placed. You’d have every reason for confidence.

Heaven! Where did you get that idea? And why do you believe what you do about it? If you want to know what Jesus taught about life after death and why the Christian faith is never hollow; why not join us for Christianity Explored.

Being a member of our congregation means believing, belonging and being – believing in Jesus and His gospel, belonging to His people and being His people by living lives of love and doing good.  Now it is true that 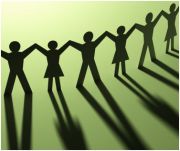 you don’t have to be a Church member to follow Jesus as your Lord and Saviour. But we believe that becoming a member of a church and making a public commitment to Jesus and His people is very helpful for a lifetime of following and serving Jesus. So with these things in mind we encourage people to attend a membership course that helps people to understand the value of membership and to make this commitment.

The television show Resurrection is fascinating many people. In it, dead people appear out of the blue. The show is strangely captivating. Strange because the experience is so unfamiliar, captivating because deep down people recognise something hopeful in the idea of rising from the dead. Perhaps you have been watching and thinking ‘what if this happened?’ Easter Sunday, with the account of Jesus being raised, is equally strange and captivating. Is it real history giving hope or a hoax for the gullible?

There are many hoax theories. Some suggest Jesus never really died or that scheming disciples hid Jesus’ body. Others suggest that the heartbroken disciples only felt Jesus was with them ‘in spirit’ and only later made-up that Jesus was risen from the dead (Luke 24:36-43).

No one actually watched Jesus rise. But it is the logical conclusion to the historical evidence. The empty tomb, the grave clothes and the eyewitness accounts fit together to make a compelling case that Jesus has risen from the dead (John 20:1-31).

What else changes fearful disciples (Mark 14:50) into fearless preachers (Acts 4:10)? Concrete convictions are built on truth (1Cor 15:3-6). In the end, only Jesus’ resurrection explains the sudden growth and persistence of the Christian community.

If Jesus is alive, does it change anything today? The morning of Jesus’ rising is the day that everything changed. It means the world with all its problems is not chaos but a place of purpose within God’s reach and care. It means Jesus’ death has won forgiveness for his people and deathless life is his gift to them. Jesus’ rising changes everything. Resurrection brings real hope for the future. Will it change your future?

We believe that the Bible is God’s Word and is useful for the whole of life.  In the bible God shows us who He is and how to know Him by knowing His son Jesus.  The Bible also helps us understand how to live God’s way which brings real peace and joy in life.  When our congregation gathers we are committed to teaching God’s word and we express that in different ways.  On Sundays, teaching Bible passages is a regular and important part of what we do when we gather together.  Likewise during the week in our Fellowship Groups, we help each other to study and apply the Bible to everyday life.  We encourage families and households to read the Bible together as well as reading the bible individually.

Rochester Presbyterian Church is committed to being a source and light and love in the the town of Rochester and the surrounding district.  We believe that God loves us so much that he sends His Son Jesus into the world to live, die and rise again so that all who trust him will share in the wonder of eternal life with Him.  It is this good news that we believe will transform individuals, families and communities. So we are committed to bringing this good news to people, growing them in their relationship with Jesus and sending them out with this good news.